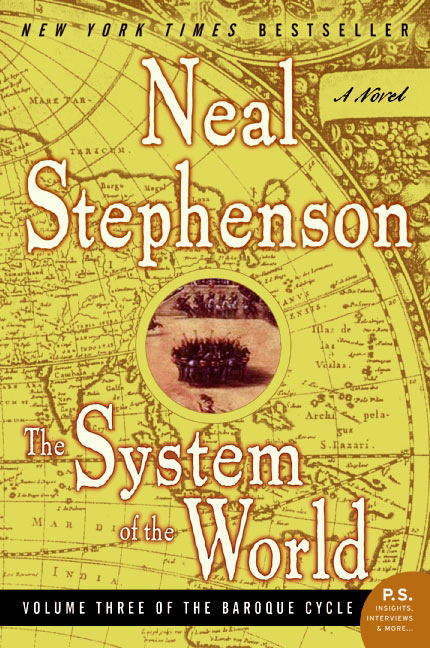 THE SYSTEM OF THE WORLD

An unexpected byproduct of CRYPTONOMICON that ended up taking over my life for a number of years. As I was finishing CRYPTONOMICON, I had two chance conversations with old friends. One was with George Dyson, author of DARWIN AMONG THE MACHINES, in which he talks about the deep roots of computing in the work of Leibniz at the dawn of the Scientific Revolution. The other was with Steven Horst, who mentioned Isaac Newton's tenure at the Royal Mint and his obsession with alchemy. Of interest to me was that CRYPTONOMICON had been all about computing, codes, and gold. The fact that Leibniz and Newton were at war with each other for most of their careers suggested it was a fertile source of plot. I made a spur-of-the-moment decision that I would write a prequel set around the time of the birth of the Royal Society. The tale grew in the telling, as the saying goes, and it ended up being a trilogy: QUICKSILVER, THE CONFUSION, and THE SYSTEM OF THE WORLD, bound and sold separately.